There was something about that spot bathed in sunlight on the bank of the canal leading into Lake Simcoe. It wasn’t the quietest – in fact lots of giggling and squeals of excitement could be heard. Those fishing weren’t the most intense with the best and latest fishing gadgets – no, they were a pretty typical family with little kids dressed safely in life jackets clutching their fishing poles.

But boy, were they pulling in the perch. And that definitely 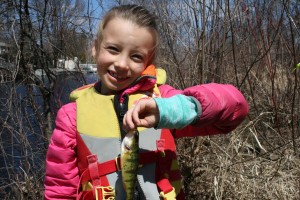 made the trip from Milton, Ontario to the Orillia Perch Festival very satisfying.

“It’s a chance for us to be together and have fun,” said Lisa Straka, whose five-year-old son and seven-year-old daughter were reeling in perch as she spoke. “We’re having a picnic; we’re with our best friends; and it’s a beautiful day. How can you go wrong?”

They are just a few of the approximately 4,000 people who cast their lines into Lakes Simcoe and Couchiching during North America’s largest registered fishing derby each year.

And there’s good reason, says festival organizer Doug Bunker. With more than 60 tagged perch worth $500 each, plus thousands of dollars in daily, weekly and Grand Prize draws, anyone of any age can walk away with not only great fishing stories, but some cash in their pocket. For this live release event, it’s not the size that matters, as long as the fish are brought in and registered, they are entered to win. 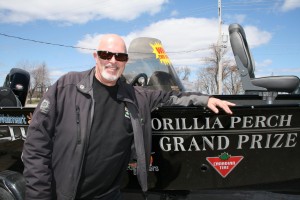 He tells of one year where both a three year old and an 87-year-old grandmother caught a $500 tagged fish.

“If you can hold a stick, you’re pretty well set,” he laughed, but also noted there are some hard-core anglers out there who enjoy the challenge of bringing in the scrappers. “Perch will fight like the dickens. If you get a little perch on your line, maybe five or six inches, you’ll swear you have a two footer.”