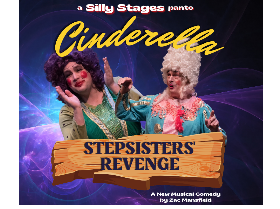 Cinderella and Prince Charming have settled into the Kingdom of Knotty-Knotty Pine as King and Queen, but the Royal Putting On Of Crowns Ceremony (including the Putting On Of The Ring Of Things) has yet to take place, to rightfully install them as the Kingdom’s leaders. All seems to be going well, until Cinderella’s Wicked Stepsisters, Helga and Brunnhilde, break out of the maximum security prison at Abracadabratraz. To make matters worse, and in order to drain the Kingdom of all the magic in the land, the Stepsisters have called in a favour – to their mother – The Witch, Hazel!

With toe-tapping songs you all know lovingly parodied, this brand-new panto will also feature TWO ORIGINAL SONGS with lyrics and music by Zac Mansfield. This hilarious new musical will leave you rolling in the aisles as it aims to poke fun at everything over the last two years including COVID-19, elections, celebrity, sensational court cases, TikTok and more – this is a panto you will not want to miss!